RG TASTINGS: Farmers’ market, fish markets bustle with the best of the season 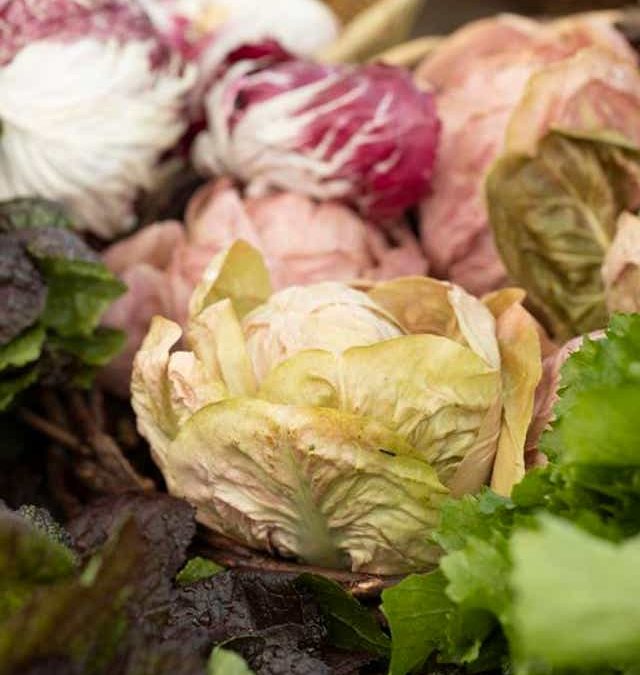 Just when the weather is at its dreariest, and the last of the summer bounty of fresh fruits and vegetables is gone, the Lane County Farmers’ Market opens for its winter season. Behold, there is abundance, even when we might least expect it.

See for yourself on Saturdays through March 28 in downtown Eugene at Eighth and Oak (10 a.m. to 2 p.m.) It’s enough to stimulate even the most casual of cooks to experiment with the earthy flavors of root vegetables and tubers, or maybe the season’s finest bitter (and better for it) greens.

Because of our mild winters, area farmers are able to grow certain crops under cover, or out in the elements, where driving rains mixed with intermittent sunshine create the savory and healthful characteristics that brassicas and greens are famous for.

At the root of it

What’s available? Let’s start with “adventurous roots,” as they are referred to on the Lane County Farmers’ Market website. Folks at the market “might see a few different, gnarly-looking roots that maybe don’t look like they would be fun to eat” says Meghan Verberkmoes, the market’s membership and marketing coordinator. “But they’re actually really delicious.”

For one, there’s burdock, a crunchy and chewy, sweet and mild root that enhances soups and stews. Even simpler, Verberkmoes says, is to pan fry it in oil with carrots, both thinly sliced. The dish is called kinpara. Verberkmoes first heard of it from Winter Green Farm in Noti, but the recipe hails from Japan. Add chili flakes and green onions, Verberkmoes says, or follow a more traditional recipe that includes soy sauce and sesame seeds.

“The other thing I’m really excited about is the celeriac, or celery root. It’s got a nice mild celery flavor, but it’s more like a potato in terms of how you would eat it,” Verberkmoes says. “It’s nice to have something different; you can kind of get burned out on potatoes in the winter.”

Although, the purple majesty variety of potato has an intriguing name, and a burst of color that does make you want to get out the sheet pan and roast them, maybe with some celeriac or burdock, and gobble it all up.

Don’t pass up daikon radish either. It’s good cooked or raw, maybe shredded into a salad (we’ll get to greens in a sec). It’s a must for kimchi makers. “There are awesome daikon radishes grown here for that sort of thing,” Verberkmoes says. “And it’s also used in Asian-inspired soups.”

Salads and the fixings

Hearty greens are the norm in February, including kale and chard. “And really great cabbages — all of that is what I start craving the most,” Verberkmoes admits. “Chicories, too.”

Verberkmoes likes to mix different kales together, such as Tuscan kale and the red Russian kale, along with chard, or maybe some frisee, on the bitter side. “Usually I go for a mix of texture.” Cellar fruits, such as apples or Asian pears, are a great offset to bitter greens when cut into a salad. Dried fruits should be available as well.

Also don’t miss Aida Food Company’s Cilantro Salsa at the market. “She’s making some really interesting vegetable-based sauces,” Verberkmoes says. “Kind of like a salad dressing, but they’re great on anything. There are a lot of different ways you could use her sauces.”

Of course, winter greens are a great throw-in to brighten winter soups — the more color the better — and to freshen up a quick omelette when the cook in the house has about five minutes of energy left to put a winner on the table.

Verberkmoes suggests, simpler still, just the greens, please: “A gigantic bunch of chard can cook down to the perfect amount once you give it a quick saute.” Season with a touch of salt, then eat up.

Fruits of the sea

Apart from farmers’ market finds, the local fish markets have wintertime treats in store, too, including the currently abundant Dungeness crab. After a late start to the season last year, the industry is in full swing.

“The hottest item right now is going to be Dungeness crab,” says Brian Caldwell, staff member at Fisherman’s Market. “All the way through February, for the most part.”

Order them fresh to take home, or eat in, savoring the restaurant’s popular steamed crab dinner or crab cake sandwich.

For sport fishermen, there’s no reason to leave the gear stored in the garage. Trout fishing is available all year in most locations. At Diamond Lake, where holdover trout have been idling below the surface and getting bigger, ice fishing may be the best way to land the catch. Yes, ice fishing.

It is winter, after all.

Depending on availability, at some point in the winter season through March 28, the following can be found at Lane County Farmers’ Market.