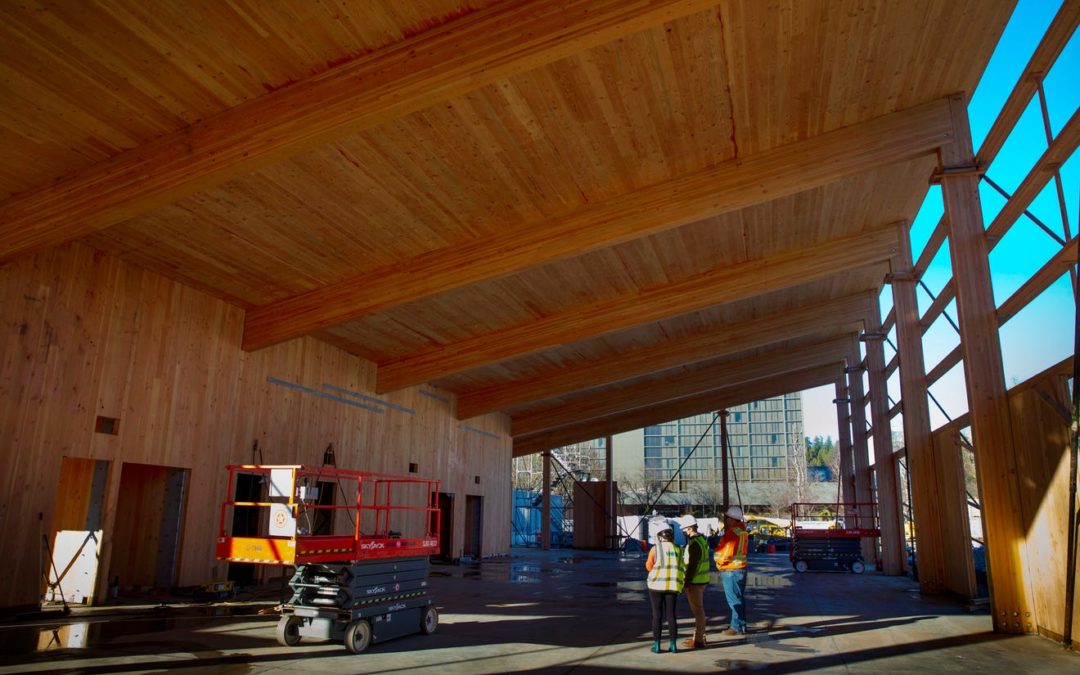 The new, year-round home of the Lane County Farmers Market will be complete by the time the 2022 season starts in April.

Modeled after a greenhouse, the wooden pavilion and surrounding plaza will give the farmers market a new and permanent home that can weather all seasons, Dowdy said.

It also echoes the spirit of the farmers market, he said — when people are buying from local vendors, they’ll be doing so in a building manufactured in Riddle out of cross-laminated timber.

“We couldn’t build the pavilion out of carrots and tomatoes, but we got the next best thing,” Dowdy said.

The farmers market has called the Parks Blocks home for decades, but the city embarked on a project a little more than a decade ago to establish a larger and more prominent year-round market space.

Work toward the pavilion kicked off formally in 2010 when the city’s Urban Renewal Agency set money aside for the project, Dowdy said. An amendment to put in more money followed in 2016, he said, with officials giving final approval in 2020.

The city signed a contract for construction last year. After demolition in May, reconstruction of West Park Avenue and completion of the foundation, vertical construction started in December.

Timber is the focal point of the building, making up the frame and slanted roof of the 8,500-square-foot building. Crews were working to secure the roof at the end of last month when The Register-Guard toured the site.

The rest of the building will be transparent or mostly transparent. Glass, garage-style doors will open upward to open up the lower half when temperatures are favorable, and the upper half will have a polycarbonate wrap.

Inside, there will service space — storage, a kitchen, bathrooms and utilities — and a large art piece forming an aerial depiction of the Willamette River with metal panels above the doors to those service spaces, Dowdy said.

The indoor space and a radiant heat floor will allow for a winter market, he said.

Outside, plaza space includes a continuation of Park Avenue, adding to the grid and giving better access, Dowdy said. The streets will be curbless like Kesey Square, he said.

There’s also a Silva Cell system that lets the sidewalk float to give more space for tree roots, Dowdy said, since the city recognizes box cars and other vehicles people would use to bring in goods and equipment put a lot of pressure on the ground.

Between inside and outside space, he said, the market could have close to an acre to spread out. Previously, it had around a half an acre, he added.

Overall, there are two major goals for the project, Dowdy said:

The space is open and flexible, he said, with a goal of accommodating more vendors and around 10,000 people without feeling empty on a Monday afternoon.

The new home for the market also showcases the pride people have in the market and makes it part of the downtown experience, Dowdy said.

While the Saturday and Tuesday markets will be the anchor uses of the pavilion and plaza, he said, the city hopes to find other public and private uses for the other five days of the week.

Though the pandemic and other factors have made it “one of the most difficult times to construct a project like this,” he said, work should be done in March in time for the market to start in April.